The Geography of Valdez

Shaped by Plate Techtonics and Carved by Glaciers
Introduction to

Valdez is located in the Northeast corner of Prince William Sound at the end of a road 120 miles away from the next sizeable city. It sits along a fjord; the steep mountain sides often extending directly down to the ocean. Much of the town is developed on small areas of flatland that was deposited by glaciers and more recently by the streams that drain from them deposting rock and gravel down along Port Valdez.

Valdez can accumulate more than 500 inches of snow, though in recent years it has been recieving around 250 inches at sea level. Summer is usually overcast with around 60 percent of summer days experiencing some sort of parciptation. In 2019 there was recorded parcipitation on about 30 percent of the days.

The town is populated by nearly 4,000 year round residents and can recieve over 100,000 visitors over summer. 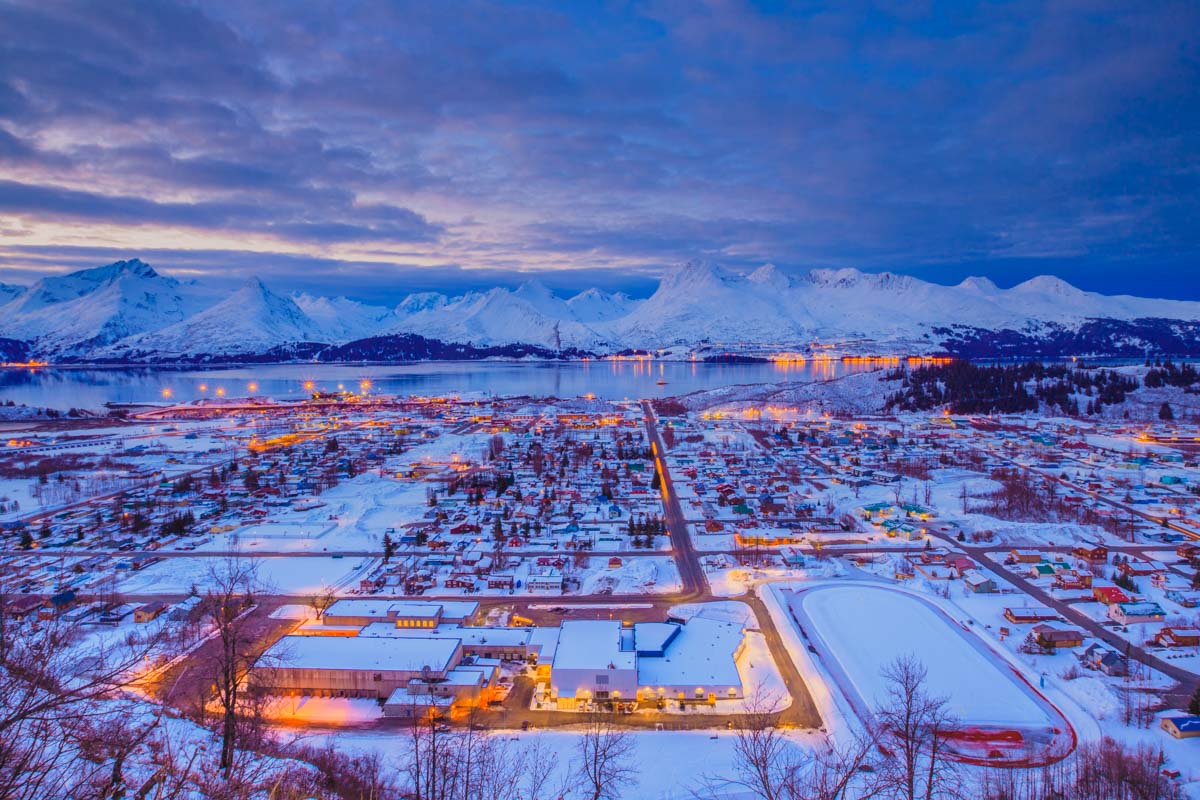 The gold lodes occur chiefly in the sedimentary beds "of the Valdez group on the north side of the sound. They were introduced by gold- and quartz-bearing solutions that with rare exceptions appear not to have met conditions favorable for the deposition of gold quartz lodes within the areas of greenstone.

Gold-bearing lodes are known in many places on Prince William Sound, in rocks of both the Valdez and Orca groups, but are far more numerous in the northern part, throughout an area that extends from the Valdez Glacier to Passage Canal and is occupied almost entirely by rocks of the Valdez group. The gold-bearing quartz lodes of the Chugach Mountains are not. restricted to localities within the area described as Prince William Sound. They are known also in adja- cent areas to the east and to the west.

The gold lodes are widely distributed but may be referred to several local areas, as the vicinity of Valdez Glacier, Mineral Creek, and the adjacent shore of Valdez Bay; the Shoup Bay area, including the Cliff mine; and the Port Wells district. The gold-bearing quartz veins at McKinley Lake near Alaganik were among the first in the 304 CONTRIBUTIONS TO ALASKAN GEOLOGY region of the sound to be discovered and are almost the only gold lodes found within the area of the Orca rocks. The Cliff mine on Valdez Bay has thus far been the most productive of the gold lodes. Other gold-producing mines were the Ramsay-Rutherford mine on the east side of Valdez Glacier and the Granite mine on the west side of Port Wells, to which might be added a number of smaller mines that have contributed to the total gold production of the region.

The ore bodies of the Cliff mine may be taken as typical of the gold quartz lodes of Prince William Sound, although no two ore bodies should be expected to resemble each other in all details. The mine is on the north shore of Port Valdez, just east of Shoup Bay and is entered by an adit known as the 200-foot level, which is only 18 feet above the level of mean low tide in Port Valdez. Several distinct veins in addition to the Discovery or Cliff vein have been mined. The mine openings extend from the level of the Hughes vein, 442 feet above mean low tide, to the 550-foot level, 332 feet be- low it, or a total vertical distance of 774 feet. The Hughes vein was originally mined independently from the surface, through an adit on the Shoup Bay side of the ridge, but later was connected with the Cliff mine by a raise. The underground openings that were made in mining operations thus extended northwest from the outcrop of the Cliff vein, near the portal of the mine, for a horizontal distance of about 1,700 feet.

The types of rock and the structural relations of the lodes at the Ramsey-Rutherford mine on the east side of Valdez Glacier, about 10 miles by trail from Valdez, are much like those at the Cliff mine. The bedrock is dominantly graywacke with included beds of argillite, strik- ing east and dipping steeply north. These beds are cut by mineralized quartz veins that range in strike from about north to northwest and dip east or west. The veins are principally quartz and range in thickness from a few inches to several feet. In places they are made up in part of crushed country rock. The gold is free. Some silver is present. The dominant sulfide mineral is pyrrhotite rather than pyrite or arsen- opyrite and is accompanied by pyrite, chalcopyrite, sphalerite, and galena. Quartz is the principal gangue mineral, but calcite, probably siderite, and country rock may accompany it. The sulfide minerals commonly are only a small part of the ore. The gold content of the veins is smaller and less constant than that of the Cliff mine, but has made an important contribution to the production of gold in the district.

Most of the attempts to recover gold from the gravels Avere made on streams flowing into Port Valdez. The more promising localities were on the upper part of Mineral Creek and on Gold Creek where small mining operations were carried on over a period of several years.